The St. Mary's Abbey of Barsento is a place full of mistery and extremely rich in architecture, archeology and nature.

You can reach the place from Alberobello along the cycling route IT1A Alberobello-Noci, immersed in the most resplendent nature. The road climbs the hill all the way up to the abbey, from where you can overlook the whole area. Many local folk tales populate this place with fairy beasts and hidden treasures. It is said that in the past, at the base of the slope, after heavy rains ancient objects emerged from the ground.

On the top, the small church immediately makes you think of other times. The adjacent building, once a monastery, was later transformed in a manor house (masseria).

The origins of the Abbey are traditionally dated back to 591 A.D., when Pope Gregory I would establish here a confraternity of St. Equizio's monks.

This thesis, even if unlikely, doesn't not underestimate the charm and the antiquity of the place, that should have been in any case already settled by monks around the 9th century.

Archeological surveys revealed how the area was already settled in the pre-Roman times, with Messapic artifacts found near the De Bellis manor-house. The same name should have Messapic origins, coming from the words: Barza (high) entum (which is).

Just on the back of the church, in fact, you can enjoy a stunning overlook. Papers from 11th and 12th century testify how this place was a crucial junction of an ancient inner road network. In fact, there were mentioned a via barsentana - that here linked Bari and Norba (Conversano) with Mottola – and a via tarantina, that linked Monopoli with Taranto.

On the right wall of the front view of the church, a stone plate reports an almost ruined inscription. It could say a lot about the history of Barsento.

According to an attempt of interpretation, made in the Sixties, it should say as follows:

It would mean: "In the year of Jesus Christ incarnation's MCC... The Community of Barsento". This inscription should give a foundation or building work landmark, placed after the year 1200. The date is partially unreadable, not allowing to define it clearly.

Entering the church, you pass through a vestibule of most recent building. What we actually see nowadays, it's the result of several restorations occured over the centuries. Expecially in the 18th century when, under the risk of collapse, the church was modified many times, such as the replace of the wooden roof to a stone vaults roof. 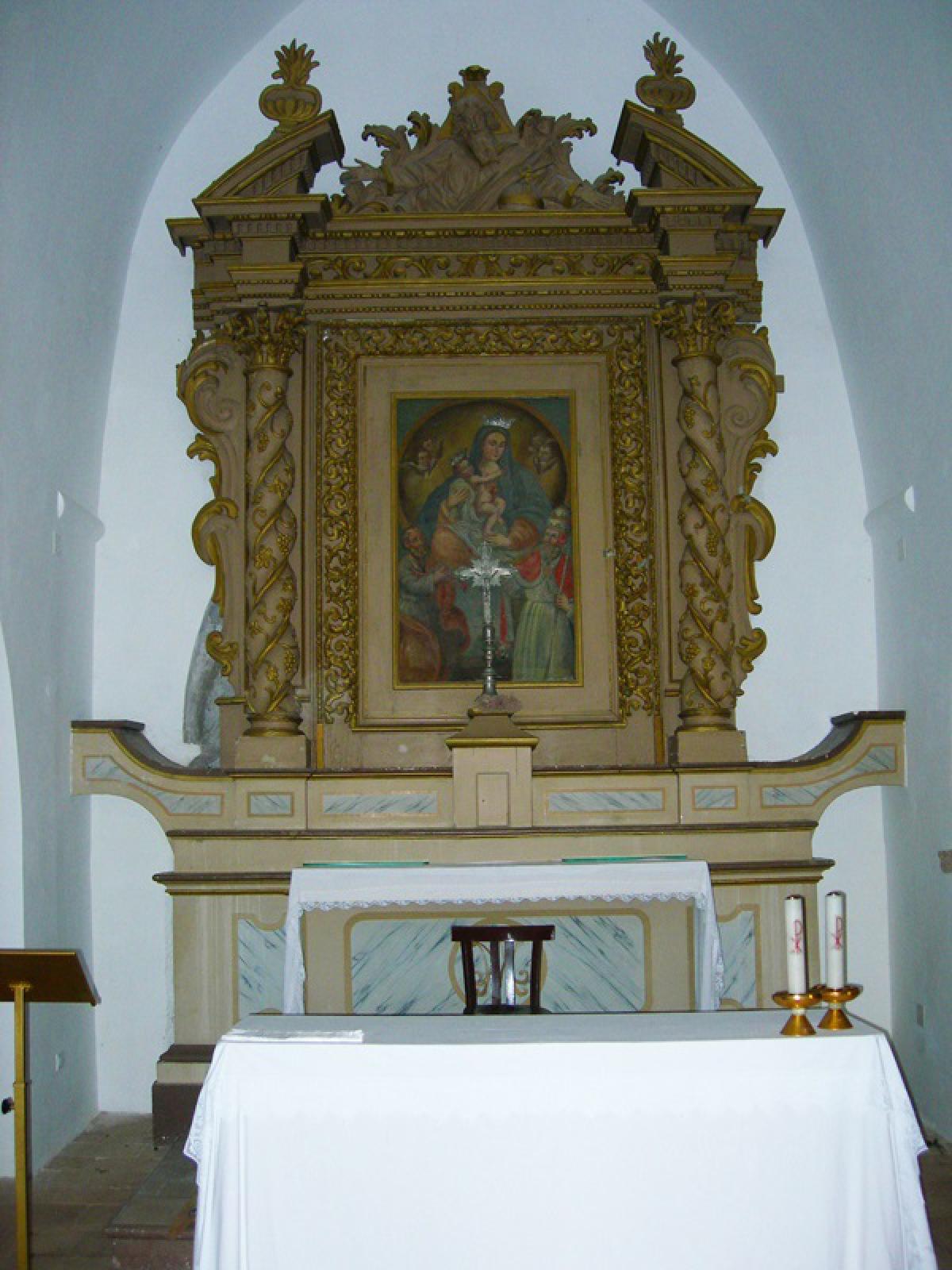 The church has three naves. In the centre dominates the painting of Madonna with Child and Saints (St. Peter and Pope Gregory I), centered on the wooden altar of the 17th century. 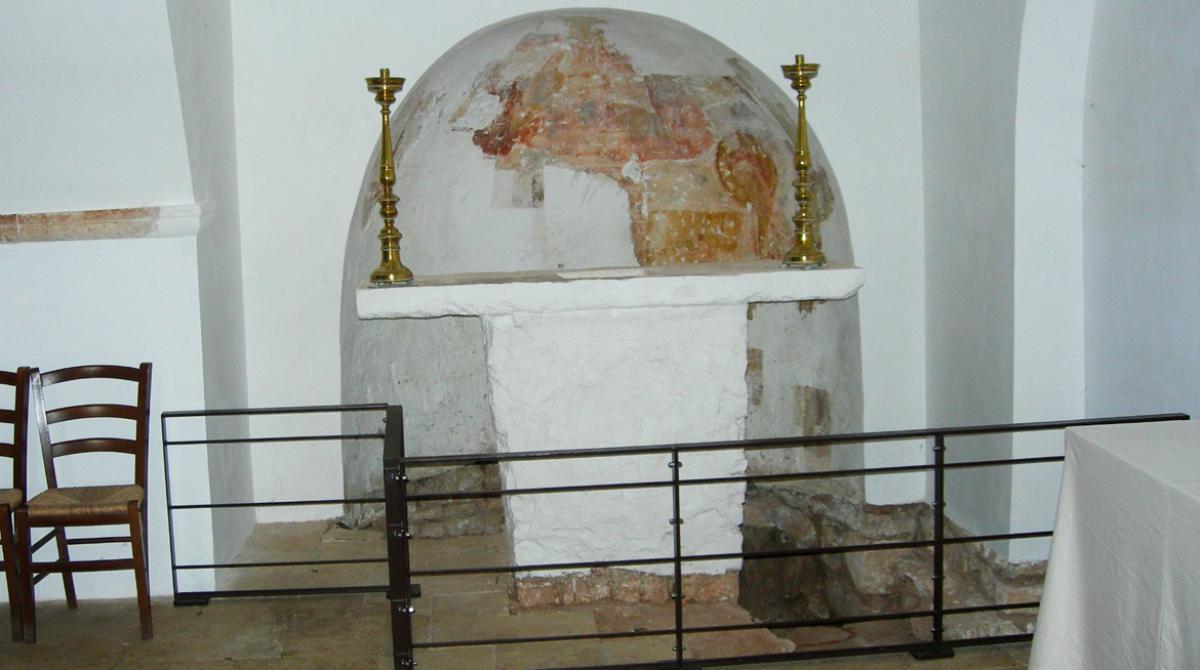 Inside the right apse, during the latest restoration works, has been recovered a partial fresco, dated between the 12th and the 13th century. On the base of the altar, the excavation tests are now visible. They were made to understand the architectural phases of the church. 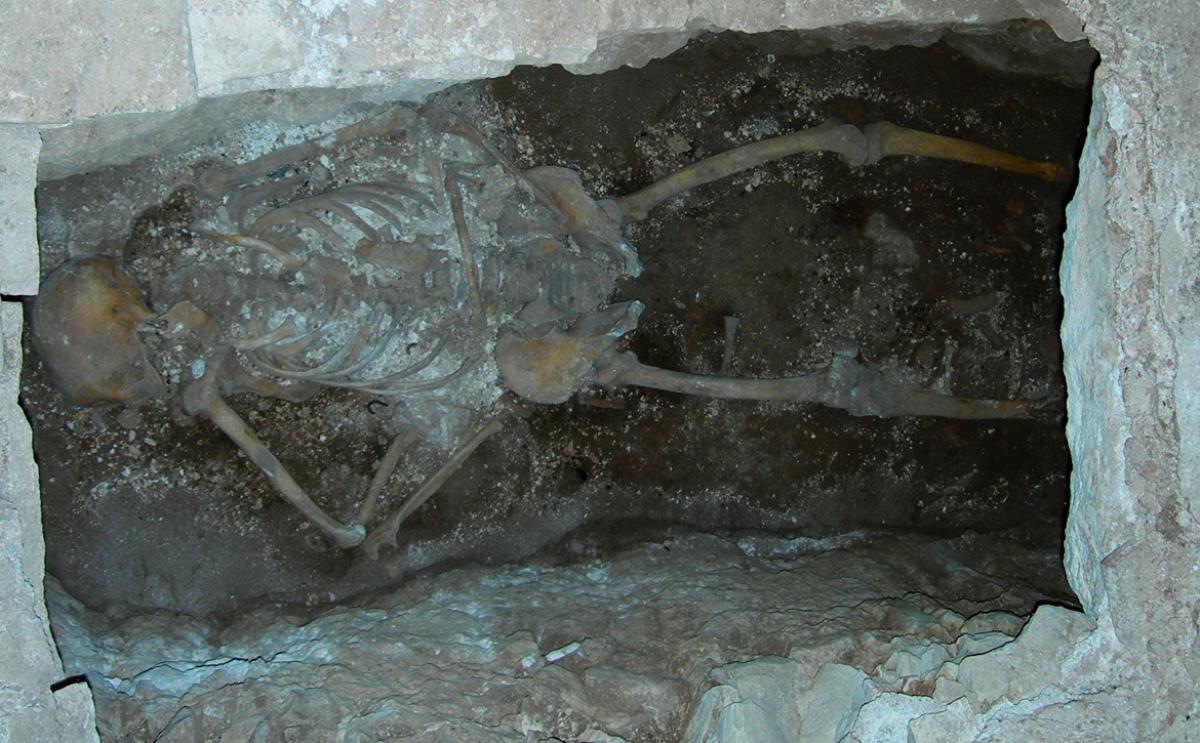 During the last restorations, two graves has been rediscovered on the opposite side of the nave. A woman and a child's tomb, and also a walled-up door, in the very same place of the inscription we have seen before. 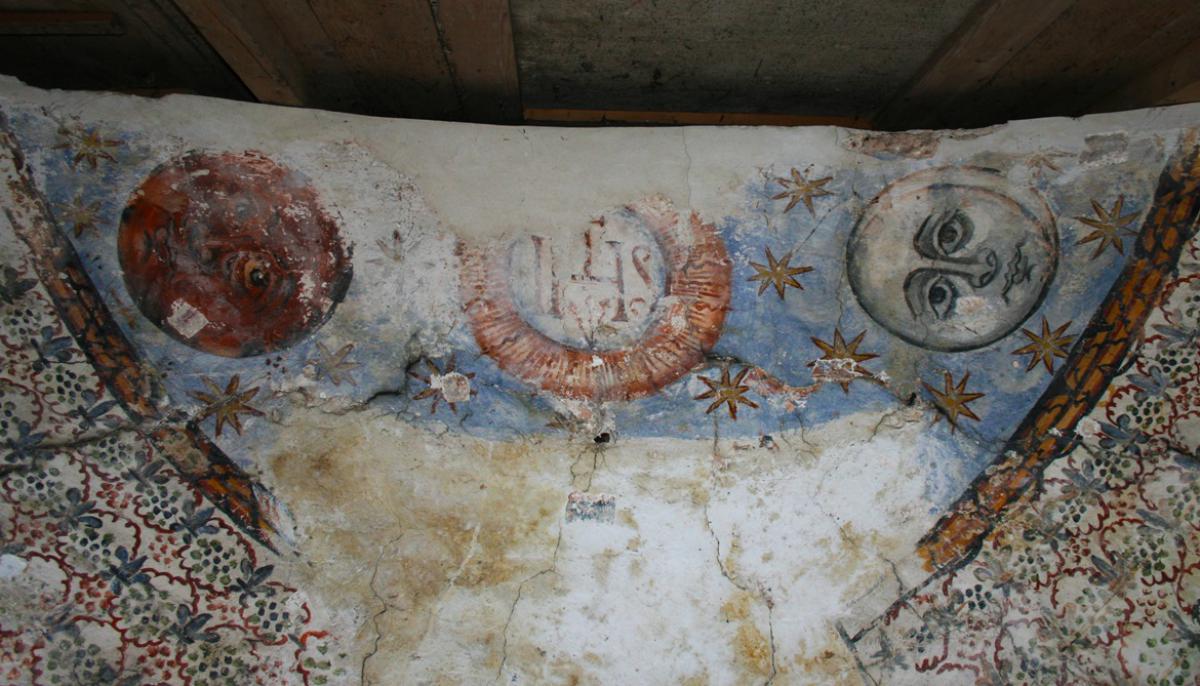 Entering from the two tiny entries on the side of the wooden altar, you can admire the best part of the church. Survived over the centuries, an incredible fresco in Byzantine style will surprise you due to the intensity of the colours and the subject: a Christogram, sided by humanized Sun and Moon, all surrounded by stars and vivid arabesques.

It is an unusual representation for the Christian world: with a pagan subjects of the sun and the moon together with the symbol of Christ. This points out the passage of the area from Paganism to Christianity. 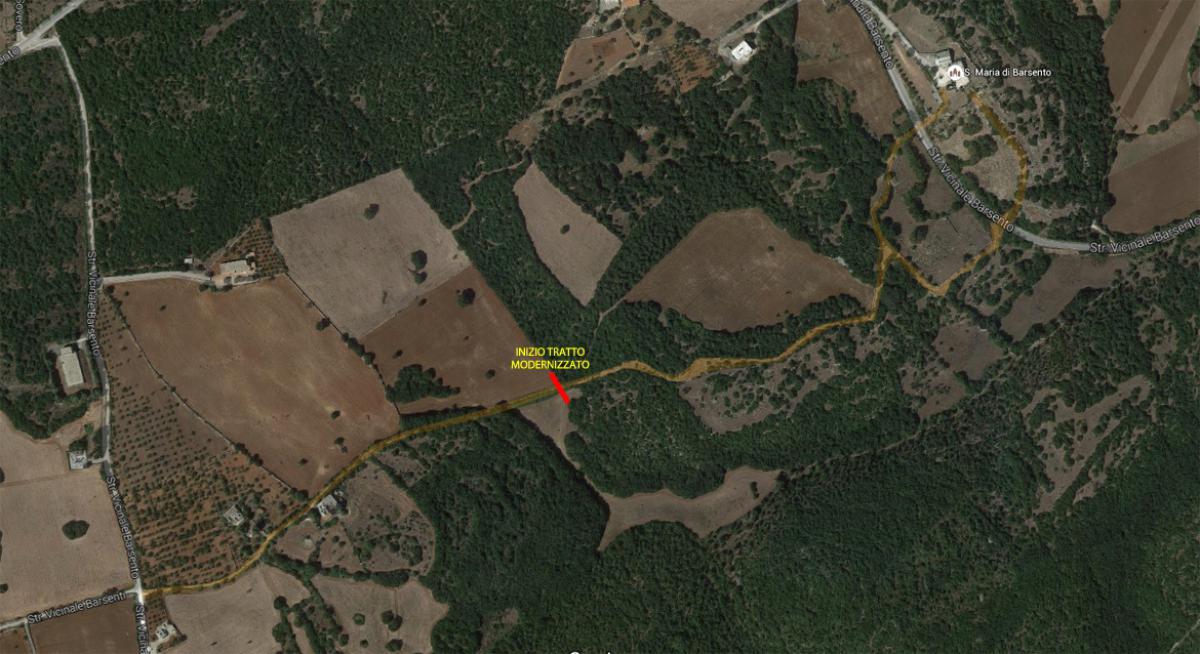 Around the site of Barsento there are other tracks of the past... You can already notice it from the satellite photos: a medieval road ring is still present nowadays. it goes westwards for 350 meters more, before it transforms into a narrow newer dirt road and then into the Strada Vicinale Barsento, the old road to Mottola. 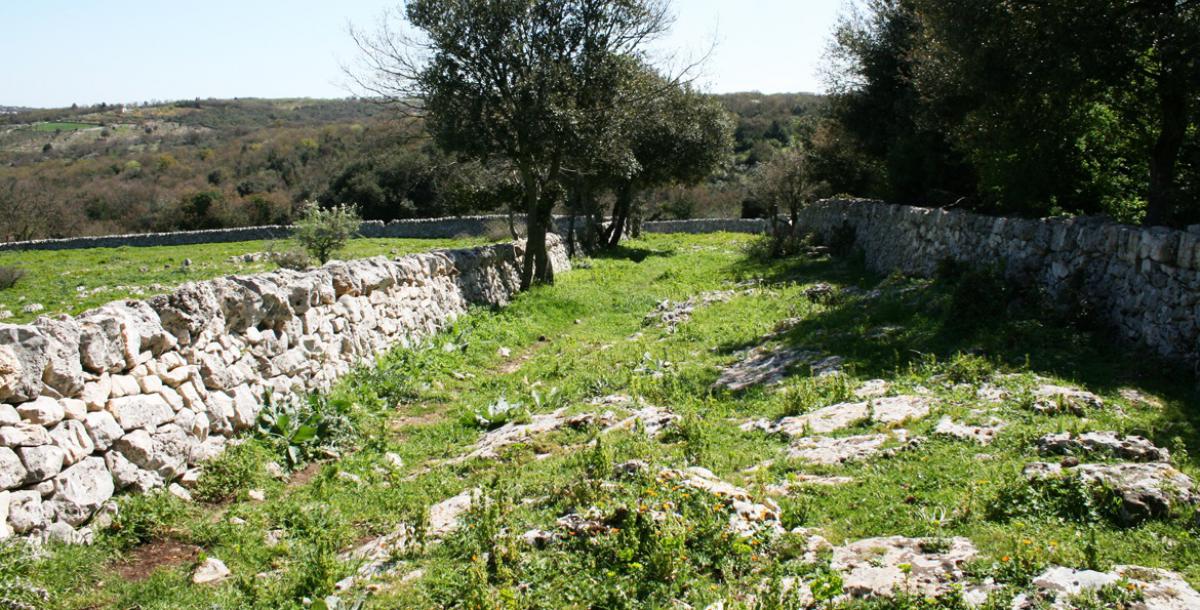 We take a venture on this ancient path, finding out a beautiful corner of Murgia.

According to the tradition (not historically proven), along this road, one night of the 1040 came the warriors of the duke of Mottola, Rainero De Fumis, with the intent of destroying the village of Barsento, together with the village of Casaboli (westward from Noci).

In year 1044 infact, after the death of the bishop of Mottola, the duke pretended the succession of his brother, the archdeacon Liberto De Fumis.

Barsento and Casaboli were against it, fearing the centralization of power around the duke's family and asked the Pope to split their churches from Mottola, to join the diocese of Conversano.

The duke swore vengeance and then raided and burned the two villages. Only the church and the monastery survived to be resettled later.

Casaboli, instead, never reclaimed again. Since then it was always marked on the maps as an abandoned place. 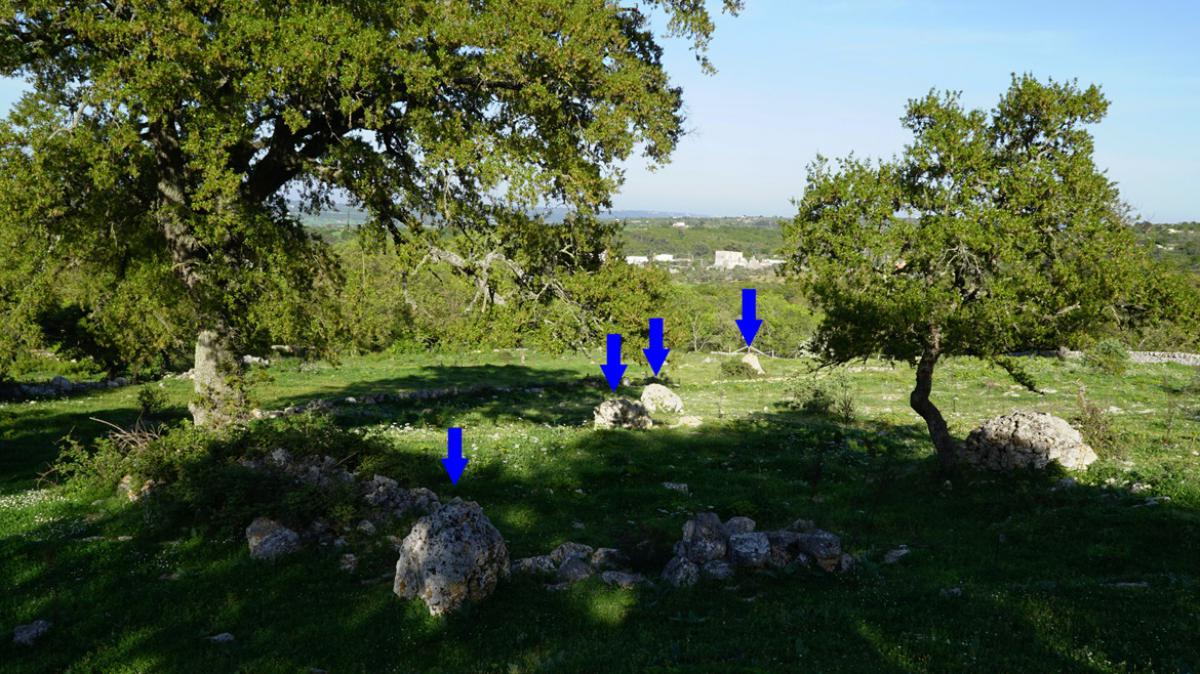 Inside the road ring, four megalithic rocks and a tombstone suggest that the place was already inhabited during the Bronze Age and was linked to the cult of the dead...

Lungo la strada, in springtime it's not hard to find splendid wild orchids, such as this beautiful specimen of Orchis italica, also known as "naked man". 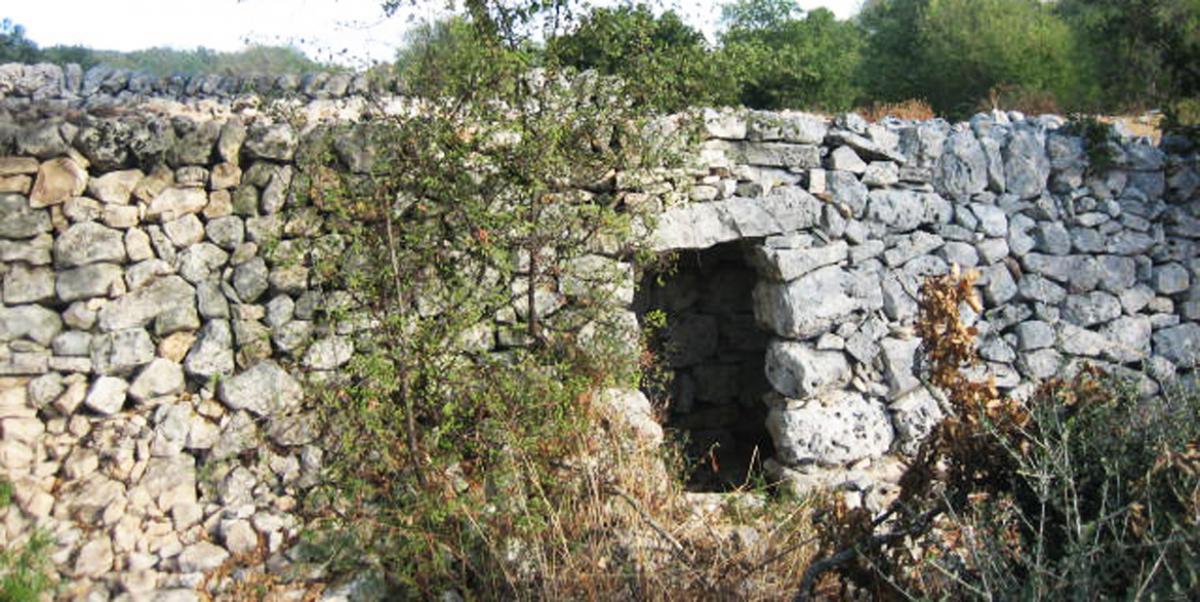 ..., a small shelter is obtained from a 2 meters large dry stone wall. It seems that during the fascism autocracy, it was used as hideout for smuggling rationed goods...

Just outside the road ring, we find the so called "soap cave", which is said to be made in the Forties. This and the nearby Madonna's cave are linked to one of the most popular local legends. It is told that a giant snake used to defend a precious treasure...

...outside the cave, you can easily understand why this place inspired so many legends. A centannial holm oaks wood envelops the whole area in a fairy darkness...

Going out from the wood, the landscape opens to the underlying valley. The human works didn't scratched naturalness of these places.