The intriguing apotropaic masks of Alberobello

That of the domestic deities and otherworldly forces linked to the house, is a foklore that already used to be, very strong, among the ancient Romans. According the Roman tradition, some of these numerous domestic deities, used to live just on the the house doorway. Frequently, some of the rituals linked to delicate and important events of the domestic life – such as births, deaths, weddings and seasonal events – were celebrated with a specific ceremony, at the very entrance of the house.

That habit to decorate the upper part of the doorway with an apotropaic mask (that helps to keep off magic and evil influences), can be easily led back to very remote times.

In the whole southern Italy, many of these lores has been transmitted until unsuspectable times, and it's still possible to see many samples of apotropaic masks, still crafted until the first years of the 19th century.

In Alberobello, even if it's a “young” town, are present numerous samples of apotropaic masks. These are almost all dated back to 1870-1890, when Alberobello lived a great building expansion of neoclassical large palaces, with the creation of new and modern roads such as Corso Trieste e Trento and Corso Nazionale, and precisely in those kind of buildings, not in the trulli, that it's possible to find those kind of tokens.

It's intriguing to watch them becaouse they say a lot about the community of the past of Alberobello, but also for their moderate artistic value. Unfortunately, the names of the skillful stonemasons who made them are unknown, in those twenty years of that century, they must have achieved a remarkable level of mastery. Just look at all the decorative elements of the neoclassical style buildings, or the same work made on the monumental cemetery of Alberobello, to understand the excellent level of sculptural ability reached in Alberobello, that has gone far beyond the sole dry buildings. 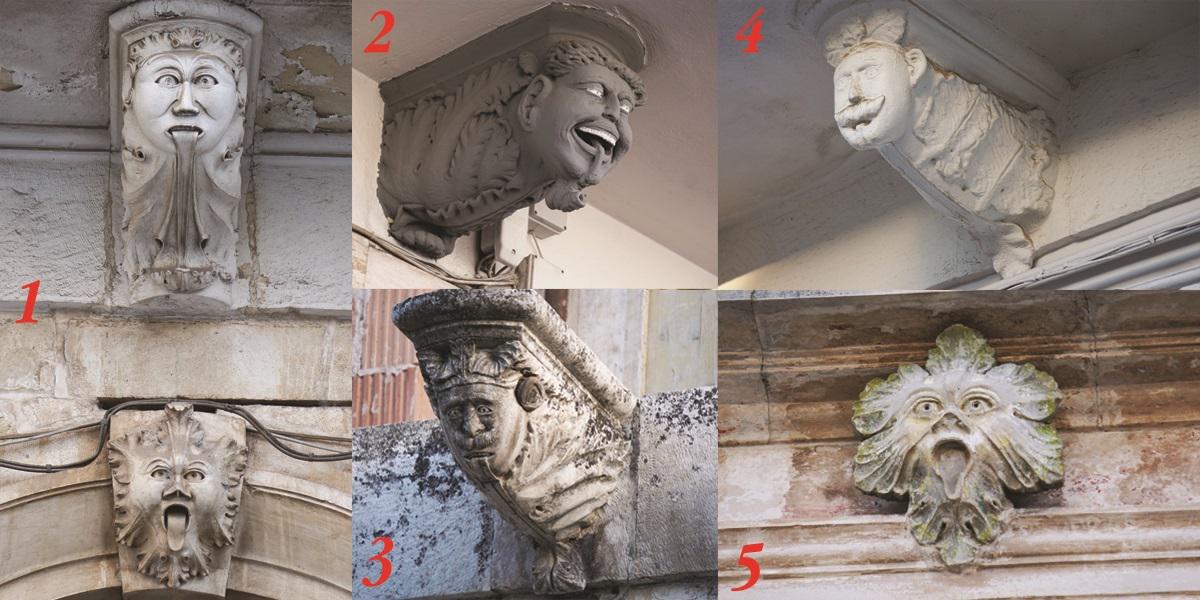 Looking up,you can notice the main feature of these masks, the long tongue, that in Alberobello becomes exaggeratedly long. This kind of depiction have a precise purpose: keep out the gossip and the envy. 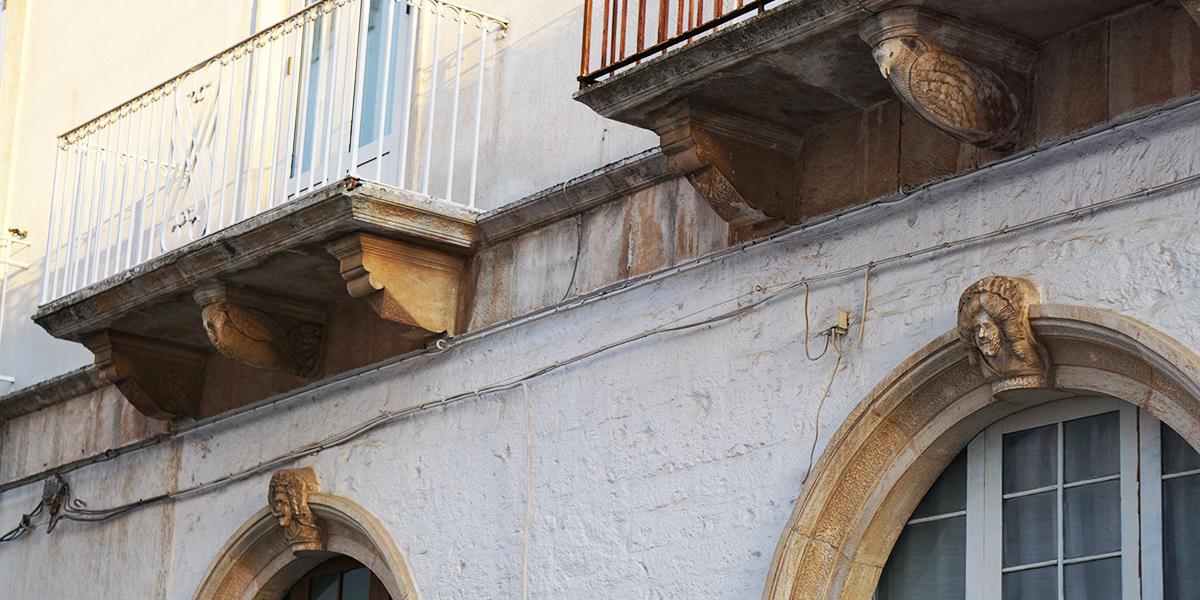 Moving to Dante Alighieri street, we find an odd sculptural presence of a man with moustaches and an austere woman, with two raptors on the top. In some manor houses north from Bari, there is the habit to exhibit dead raptors on the top of the buildings (a ritual find also in the Apuleius' Metamorphoses!), with the aim to ward off the raids of the hawks in the hen-house, and generally, to keep off the disgraces. The interpretation that can be made in this case, is that the faces are the portratis of the owners, and the apotropaic raptors surmount them almost as if to protect them. 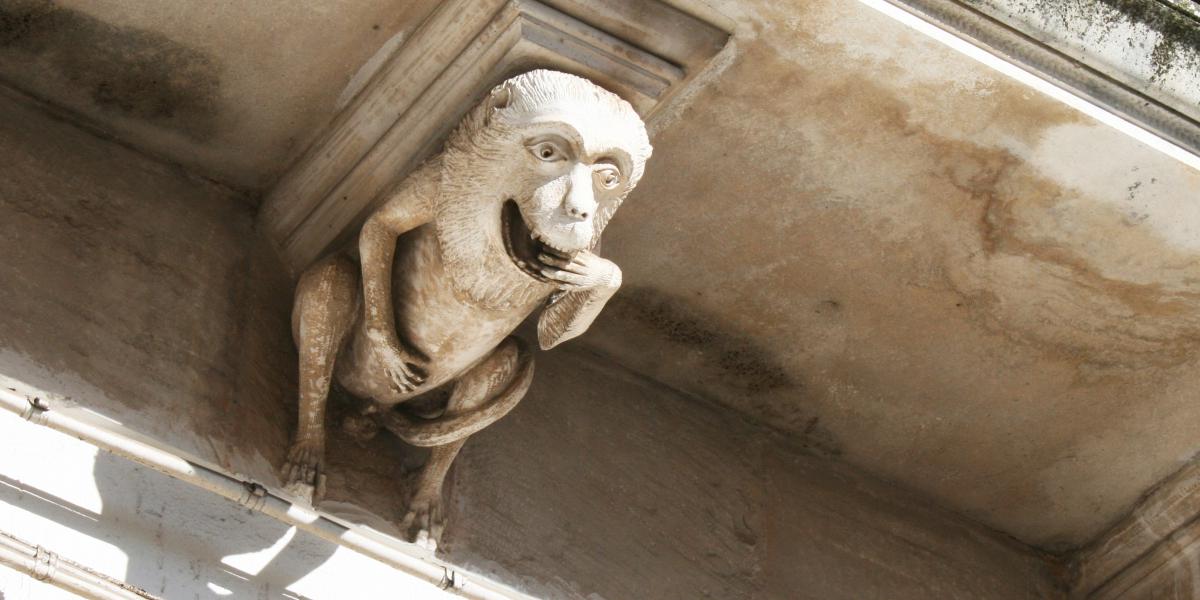 Also very ineresting is the apotropaic mask in Piave street, a monkey. In the christian symbolism, the monkey figure is linked to luxury and envy. He's biting her own hand, so one more time, is more likely representative of envy. As it seems, a very felt and feared sentiment at that time. 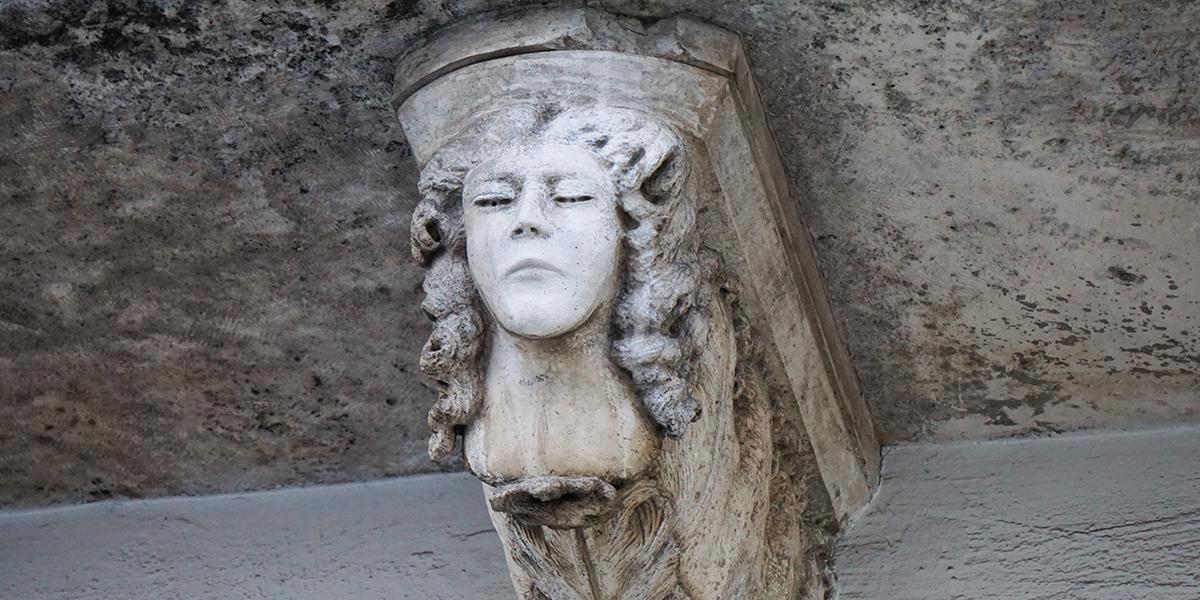 Just at the front building, we can see a bust of a lady with eyes shut. In some places of Puglia, those feminine representations are called “Pixies”, protectors of the family and the house, according to the folklore, it's said that those goodful spirits live in the entrance halls, in the under-stairs spaces and into the stables, and it is not wise to enter in a house, for those who feel bad sentiments for these feminine figures. 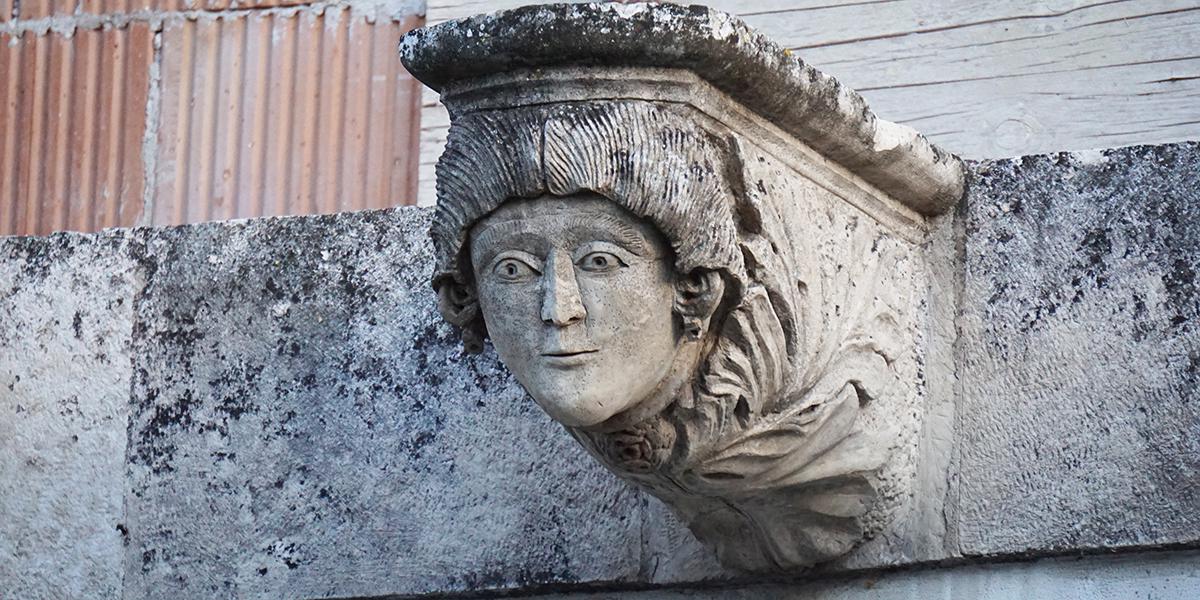 Also in Trieste and Trento street, there's a feminine figure similar to the one in Piave street, sided by the long-tongue man, already seen in the first picture. 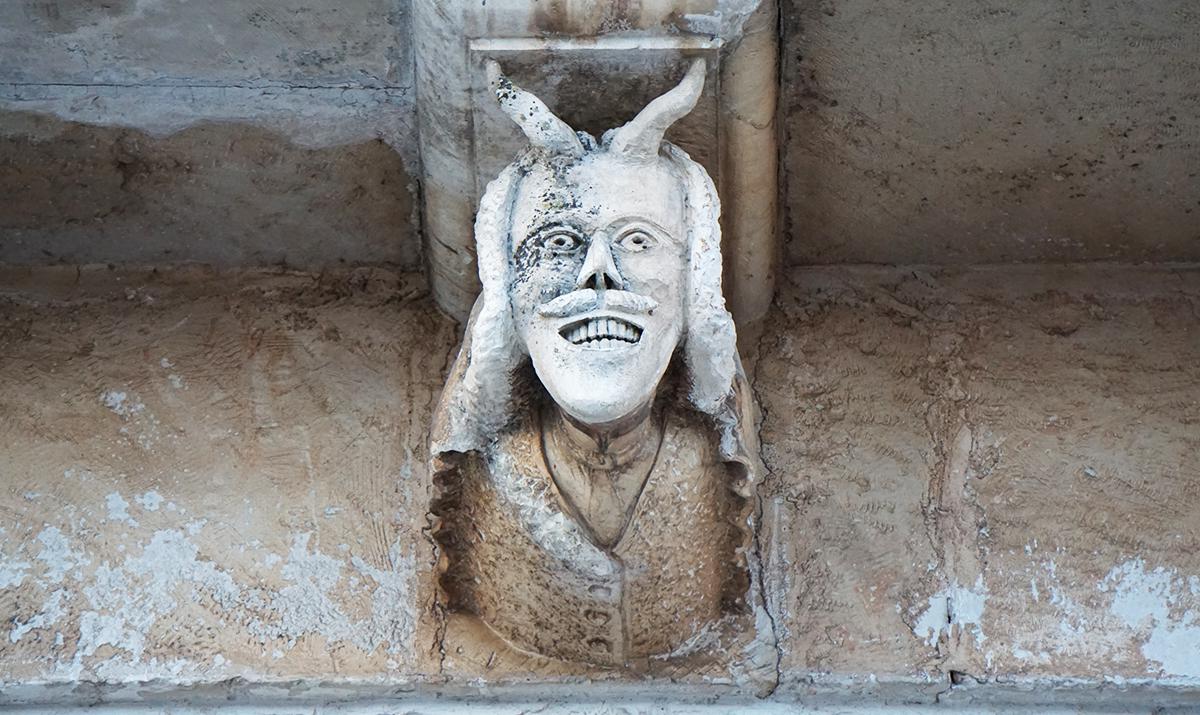 Unequivocal is the meaning of one of the most picturesque masks of Alberobello. It's located in De Amicis street and its message is loud and clear: Beelzebub stay away from here! 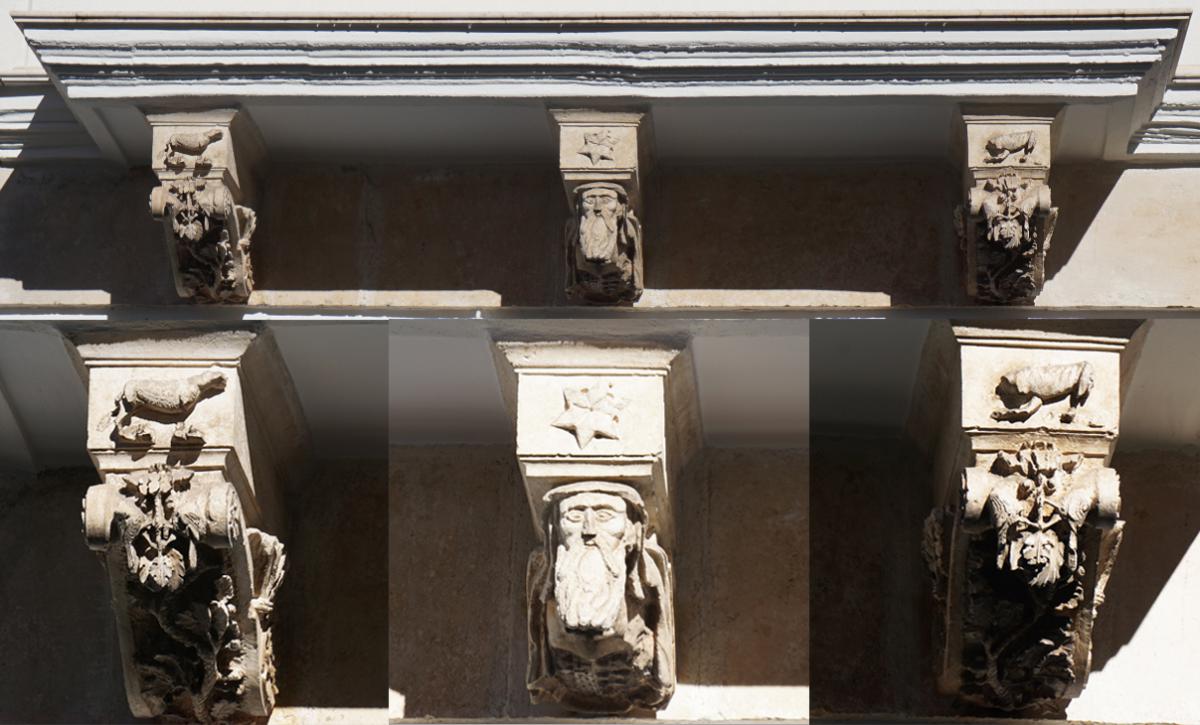 Harder to interpretate is this bearded man, located in Cesare Battisti street, surmounted by a six-pointed star, and flanked by floral and animal figures - unfortunately very ruined - two pairs of birds clinging to a tree and surmounted at the bottom, from what looks like two Leonine figures. 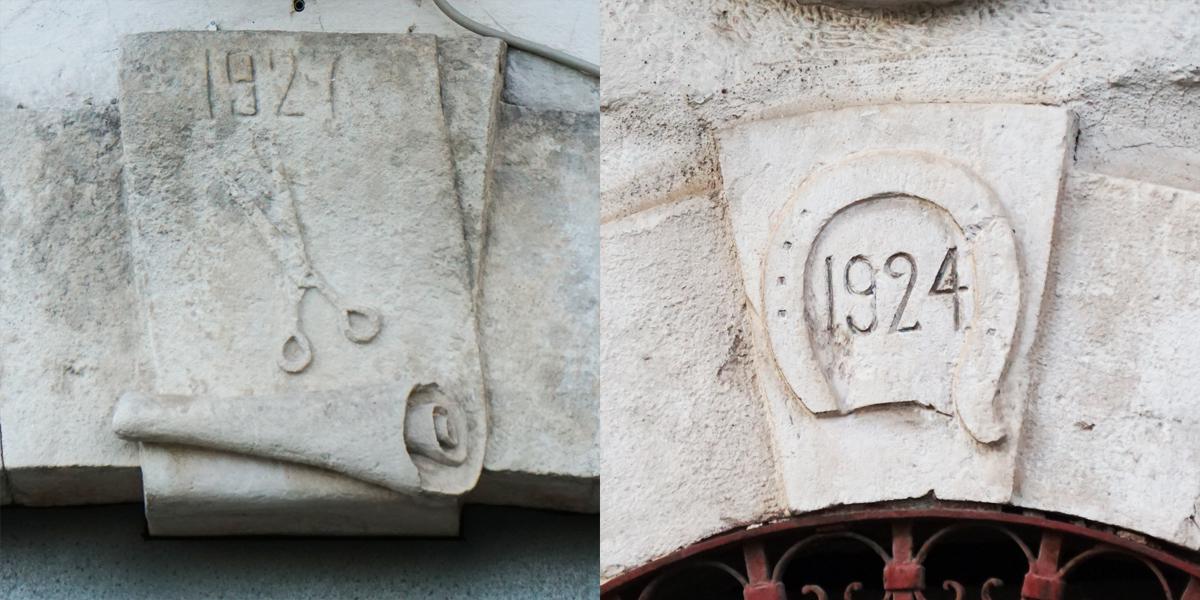 Going forward in time, in the buildings built in the 20s of the twentieth century, the most represented figures become horseshoes, the known lucky charm, and scissors - sometimes impressed in the fresh concrete in front of the doorway. Scissors also have the purpose to "cut" the gossips.

Another interesting area to discover stone masks is found in so called “The Artisan Quarter of 1920s” of Alberobello, - but that is a different story.